The best movies I watched this year

Although a little heavy on the emo, I really enjoyed watching a non-superheroey super hero movie. The villains are all too real: crime bosses and Q-Anon types. And Batman is convincing as the type of rich disturbed loner who would spend his nights slumming it in Gotham City, beating up criminals. The only major complaint I have is that it was a bit on the long side, but the way it looked in IMAX made me more forgiving.

What a great film. Funny for kids and adults, and twenty years later still looks fine. After re-watching it this year, I bumped it up to sixth on my all-time favourite animated movies (it was ninth). Finding Nemo had to take the fall.

Not a perfect film (not such a fan of people screaming at each other), but thought-provoking. The unconventional way they filmed it made the dialogue ring true. And the ending is shudder-inducing.

The best shows I watched this year

This was a television show that followed on from some internet shorts of the same name (which I adored). The show is even better though. More time to really delve into the themes in the uniquely dark but funny way they do. We get a satirical look at work, death, family life, friendship, the suburbs, and the meaning of existence. After we finished watching the season, we immediately watched it again; that’s how much we enjoyed it. Some really catchy songs too.

One of those shows that make you constantly ponder what you would do if you were in the shoes of the protagonist. Incredibly well-made, even if I did think the pervasive foul language was a bit much. Could have easily been shown to a wider audience if they’d had more restraint. I understand the desire to capture true to life dialogue, but this is not The Wire or something; it’s essentially a science fiction show.

Sign me up for as many seasons of this as they make. A more interesting story line than the other seasons as well since the competition had more parity. I’d like to see more sports film reality shows of their events. And this is one where the foul language is less noticeable and more excusable–we get to listen in on the actual dialogue of drivers racing eachother at incredibly high speeds; they’re going to let some curses fly.

Now let’s get to the stats! 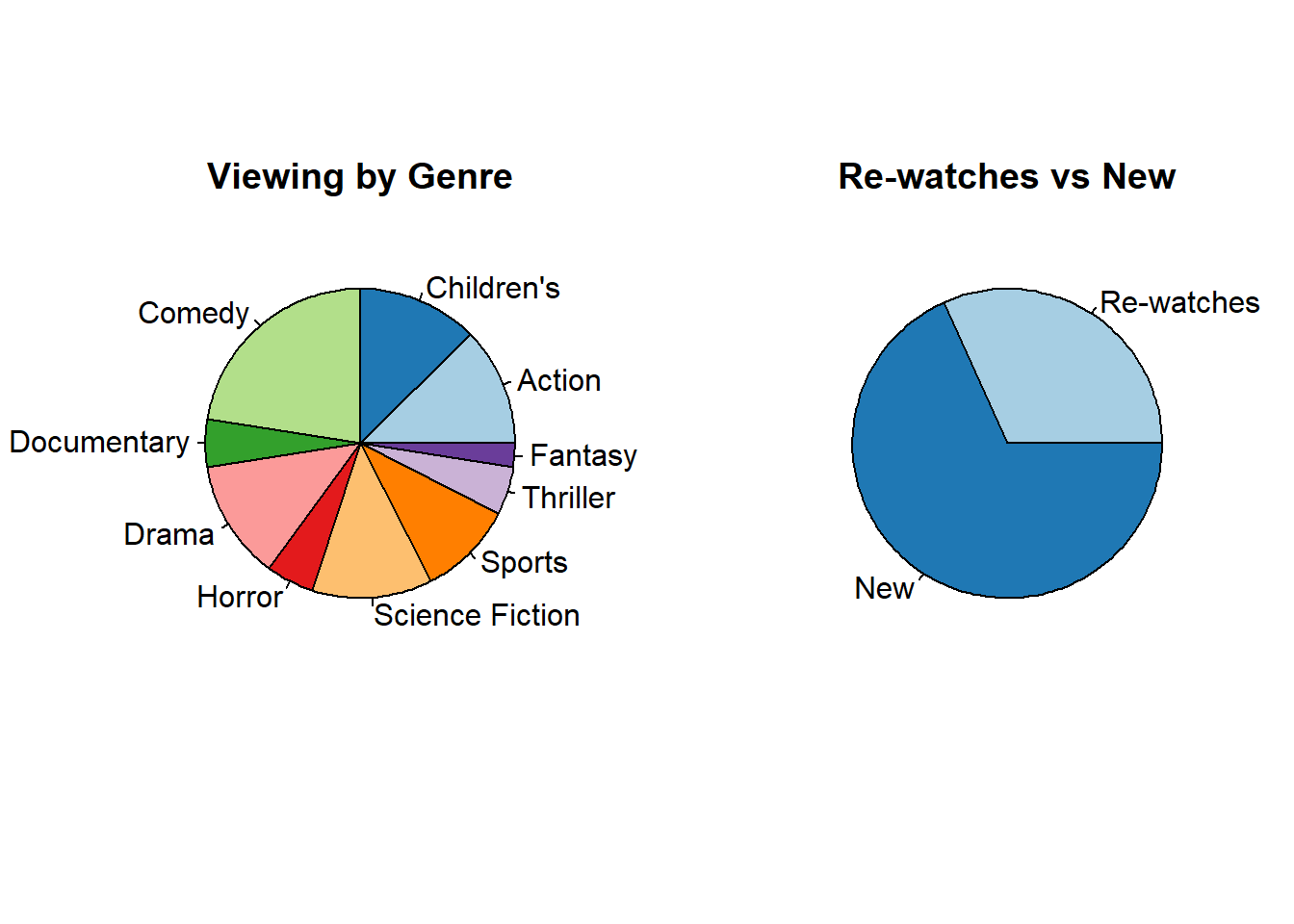 This year I also began keeping track of how much I enjoyed each movie and how good I thought each movie was. So I can see which type of movies I tend to enjoy. 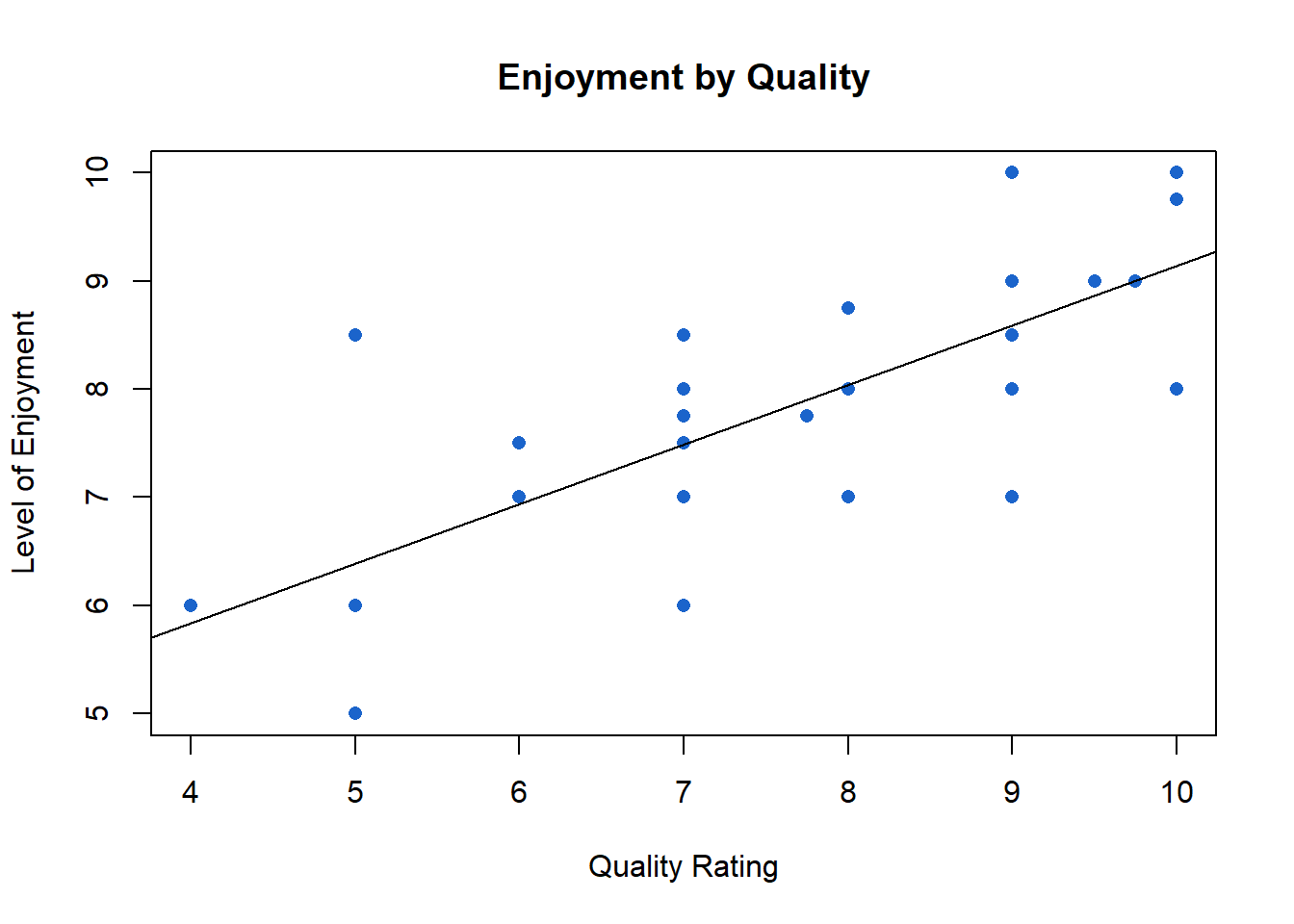 Well, it is clear I enjoy movies that I think are well-made. While that may seem obvious, I wasn’t sure if it would be the case given that I like plenty of dumb movies–movies I know are bad. But, as you can see in the scatteplot above, there is a clear relationship between my self-rated level of enjoyment and my assessment of film quality (Pearson’s R = 0.69).1 As the quality rating rises, so do the enjoyment scores. That’s what the regression line shows: a one unit increase in a film’s quality rating leads to a 0.55 increase in my enjoyment.2 To put it another way, the quality score I assign to a film explains nearly half of the variation in my enjoyment scores.

But what about other indicators of quality? I did also record the Metacritic and Rotten Tomato scores for each film or show I watched. I won’t display the plots, but it’s fair to say that I mostly agreed with the critics about whether a movie was good.3 Me bumping up a movie a point is about equivalent to me bumping a movie up half a point for either Metacritic or Rotten Tomatoes.

But were the critic scores correlated with my enjoyment of a movie? 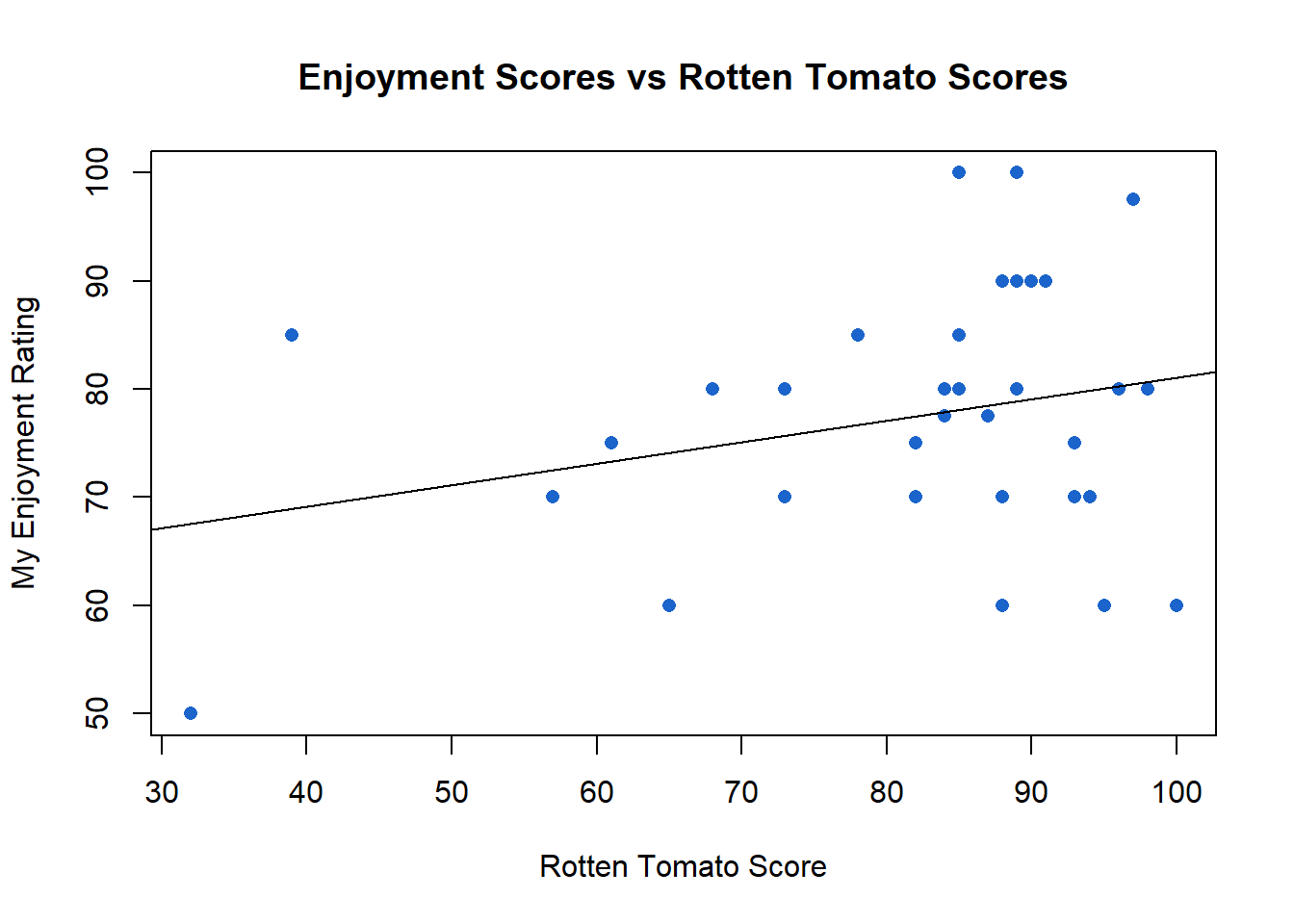 You can see evidence of this in the scatter plot–there are so many movies wildly deviating from the model’s prediction (i.e. falling far from the regression line). For example, you’ll notice there are several movies that got Rotten Tomato scores in the 90s that only get a 60 on my enjoyment meter. On the flip side, There are movies that I put in the 80s on my enjoyment scale, that score in the 40s and 60s on Rotten Tomatoes. To put it another way, both Metacritic and Rotten Tomatoes scores explain less than 7% of the variation in my enjoyment scores. In other words, the reason I like a movie appears to have almost nothing to do with the score critics give it.

The normal caveats about small samples apply here, of course. I’ll have to keep track another year or two before I have enough observations to be really comfortable abandoning Rotten Tomatoes, but the early signs are not encouraging. 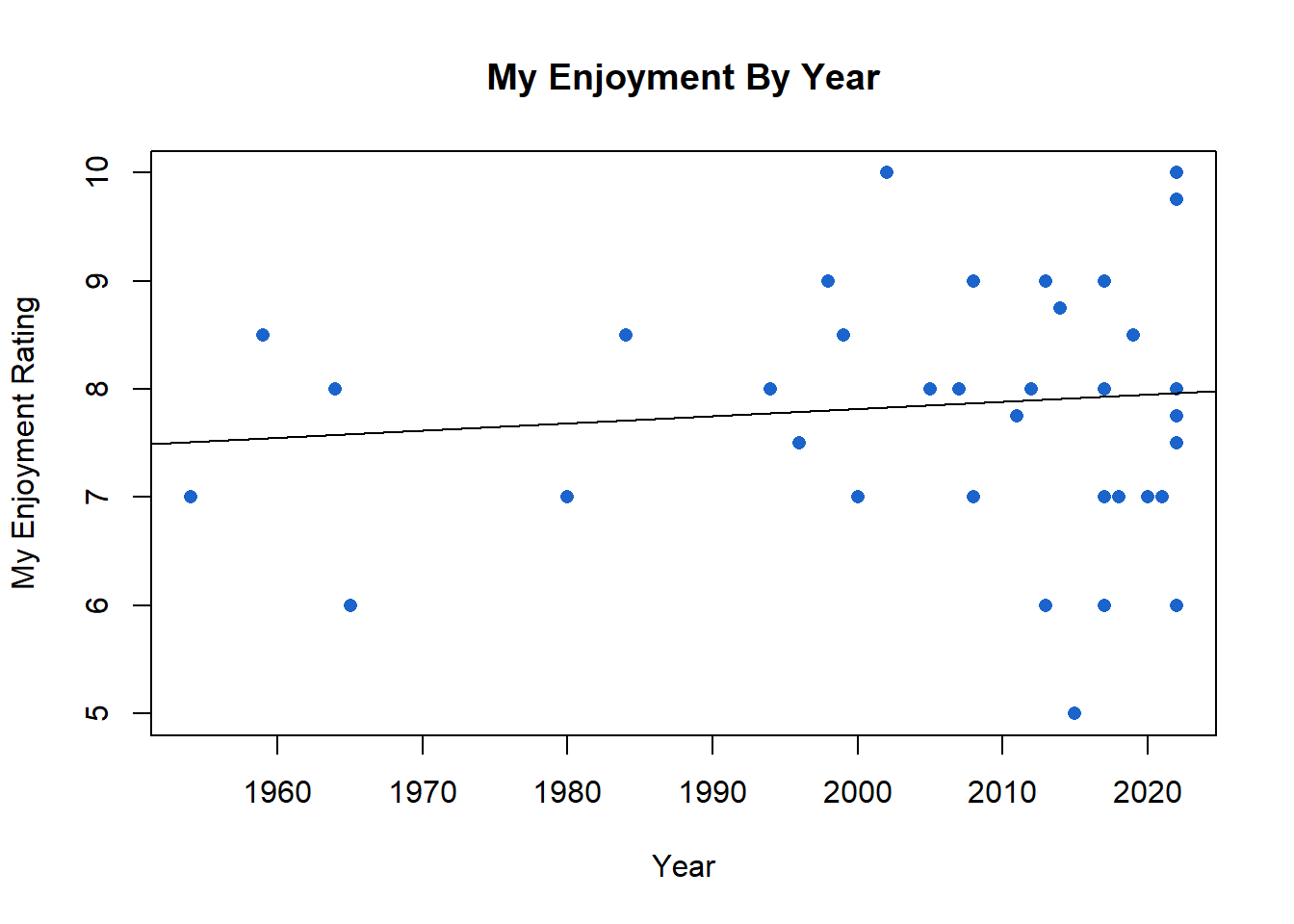 Again, basically no relationship.6 I enjoyed older movies as much as I did newer ones; of course, there were far fewer older movies in my watchlist. Three quarters of all the movies I watched were released in the past twenty years, with a quarter of those being released in 2020 or later.