This year I kept track of both books and movies. Let’s start with books. These were my three favourite books read in 2021:

Before Marvel’s horrible multiverse there was the Greek mythoverse. Over generations, the Greeks built a shared collection of stories with reappearing characters and a somewhat orderly timeline. Circe, as a character, appears in the Odyssey, but doesn’t play a particularly large role. In this book, Madeline Miller, who has an MA in Classics and has taught Greek for fifteen years, continues in that tradition of extending their mythical universe. She gives Circe a backstory, a character arc, and generally puts some flesh on her bones. She goes a little too far, in my opinion, by trying to shove every character from Greek mythology in there (we meet the Minotaur, Scylla, Daedalus, Prometheus, and many others). That made parts of it feel like well-written fan fiction. I also didn’t like what she did with my hero, Odysseus, although I recognize that it was a masterful character study. He becomes an irritable, paranoid, roving bandit. And I could have done without the romance with Telemachus. So, lots of choices I disagreed with, but I enjoyed the book immensely despite this.

Call of the Wild and the Sea Wolf1 are two of my favourite books from classic literature, and these short stories are very much in the same vein. Simple adventure stories featuring prospectors, explorers, and Native Americans. London holds on to his brief time in the Yukon much like I do my brief time in Morocco–it shaped who he was and what he valued.

This was my first exposure to Donna Tartt. I liked this one so much I read her other two, which, while still being excellent, weren’t quite as enjoyable. After each book I finish, I jot down a few notes about it. My notes for this book called it “surprisingly addictive.” I say ‘surprisingly’ because it is hard to exactly pinpoint its appeal. It’s about a group of rich pretentious undergrads at a fancy liberal arts college. So I suppose there’s the voyeuristic pleasure of watching spoiled brats receive their comeuppance, but you don’t even get that because it’s always hard to root against the protagonists. I suppose there is the escapist wish-fulfillment that many people have about how they imagine college to be. The escapism is heightened by the characters not feeling very real, but I think that may have been a deliberate choice by the author. They have a strange, Gatsbyian vocabulary, a sartorial style that resembles the Cullens from Twilight, and a dedication to studying Greek (which they apparently do well despite constant drinking and sojourns out to the country house). The author makes you spend so much time with the characters though, in such close quarters, that in the end you become inured to their faux-aristocratic mannerisms by sheer dint of claustrophobia. You never leave the confines of the ivy-clad college, nor do you meet many other characters. It’s just this strange group of anachronistic young people for 544 pages. So, I say strangely addictive, because it is an excellent book despite these strange choices the author makes. Tartt is an incredible writer; you have to be to make the premise of such a book so compelling.

Something new this year, I also kept track of shows and movies I watched. My three favourites:

Very funny, rather profane, and surprisingly dark. What I thought was more or less a comedy slowly morphed into a brutal political thriller. And while the director may have played it fast and loose with the actual historical events, I suspect the relief the other Soviet bigwigs felt at the megalomaniac’s death must have been as palpable in real life as it was portrayed in the film. Everyone who follows up the rule of such a tyrant gets to be the good guy–“sure, let’s ease up on the arbitrary prison sentences, the random political murders, etc.”

Like my first choice, probably best characterized as a midnight-dark comedy. I don’t think this film could be made today–calling it insensitive would be polite. The best description I could give of it is that it is a sort of This is Spinal Tap for aspiring Jihadis. The main actor from it, Riz Ahmed, seems to be in everything lately. He was excellent in this anyway.

I nearly always like sports documentaries, so I figured I would enjoy this even though I don’t watch Formula 1. And I certainly did. I learned that Formula 1 isn’t about who is the best driver; it’s about who can make the best engine, who can manage talent the best, who can find the best employees, and of course–who can raise the most money. The show does a good job giving us a view of the sport from the perspective of the drivers as well as the managers. And of course, they manage to impose an interesting narrative for the viewer on a sport that is essentially cars going round and round in a loop. I loved this show even though I would never subject myself to watching an actual Formula 1 race.

Thought I’d also mention the three movies which were the worst of the crop, so they can be avoided:

I watched it because I have enjoyed some Tim Burton movies in my time, but this was definitely the worst of his films that I’ve seen. It wasn’t helped by Asa Butterfield’s (from Ender’s Game) non-acting, nor by Eva Green (who plays Miss Peregrine), who compensates by dramatically overacting. It’s also got the usual time travelly type gimmick that so often ruins movies.

This movie got 83% on Rotten Tomatoes, I’m not sure how. It was sooo slow and boring. The plot is basically this: a boy with undefined powers (which mostly manifests in glowing hands) gets to go on a long drive through on very dimly lit highways.

As unfunny and joyless as the real competition is hilarious and joyous. I blame Will Ferril; he tends to ruin movies. I do like this song from it a lot though: https://www.youtube.com/watch?v=CLO1lyAolf4.

Now, on to the stats! 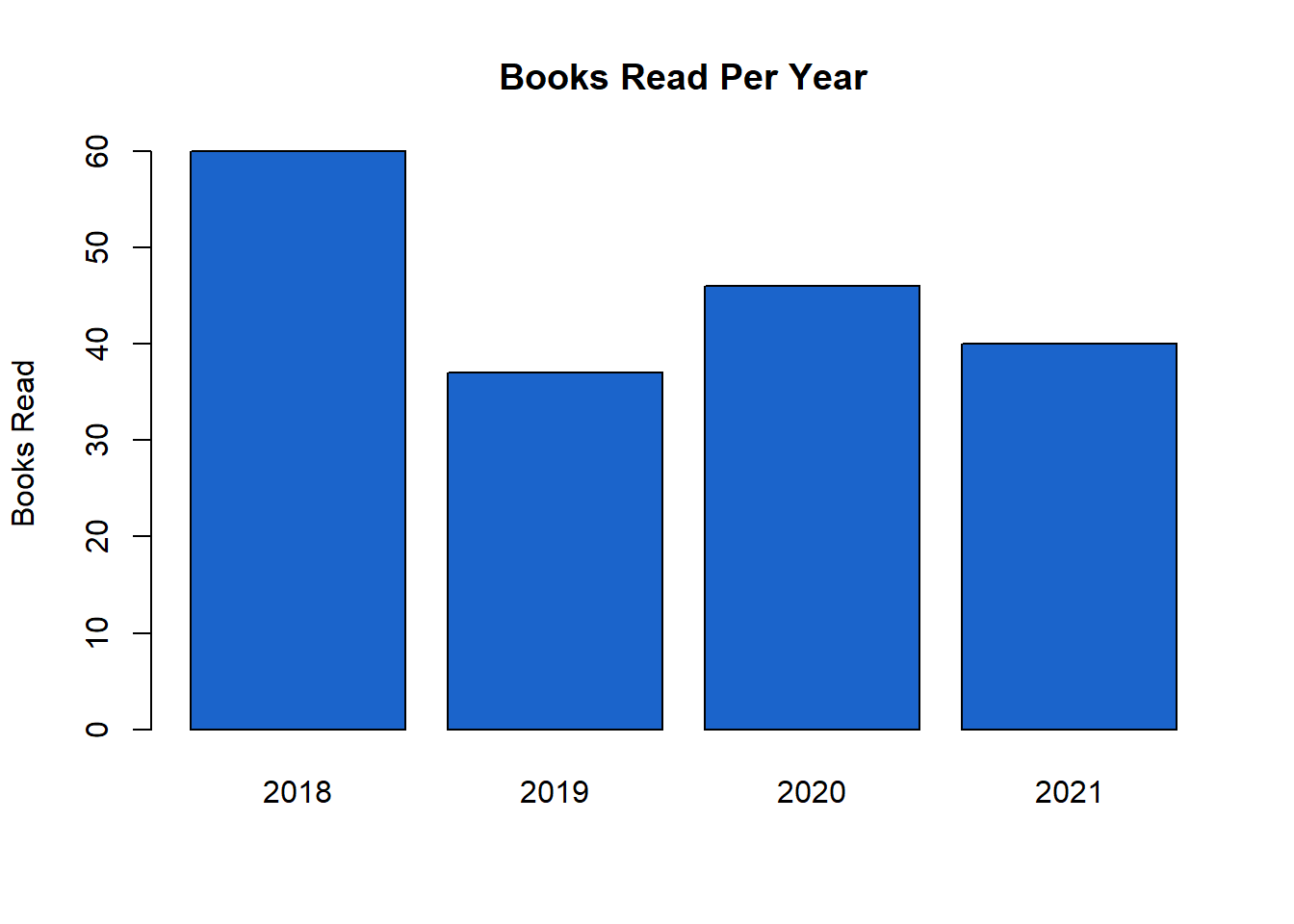 A slightly down year, but in the same ballpark anyway. 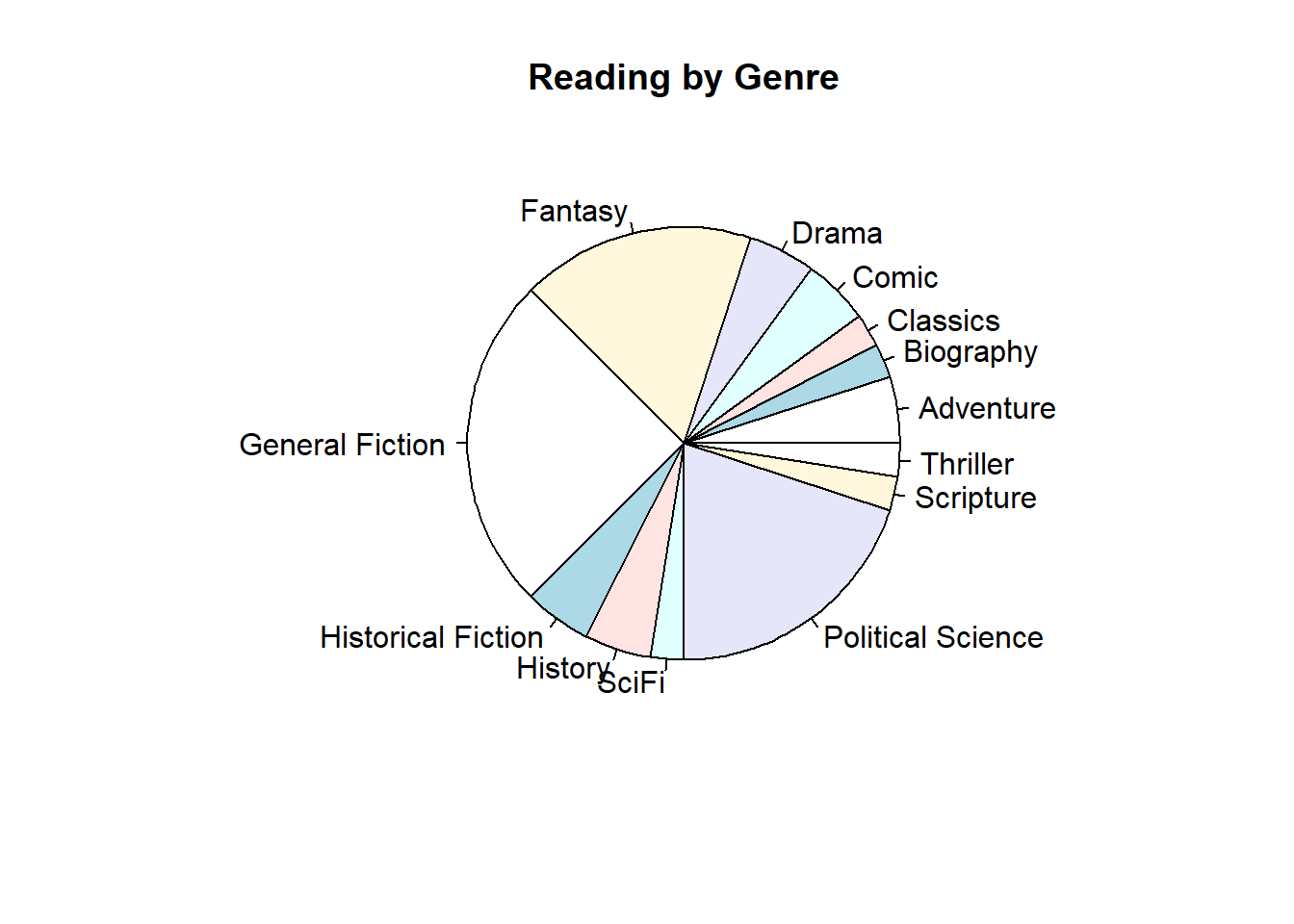 Fantasy remains a go-to, but my Science Fiction consumption was way down. Replaced by General Fiction books it appears.

Some other stats from my books this year as compared to my average over the last 3 years:

Combining all 4 years of data that I have, these are my most read authors: 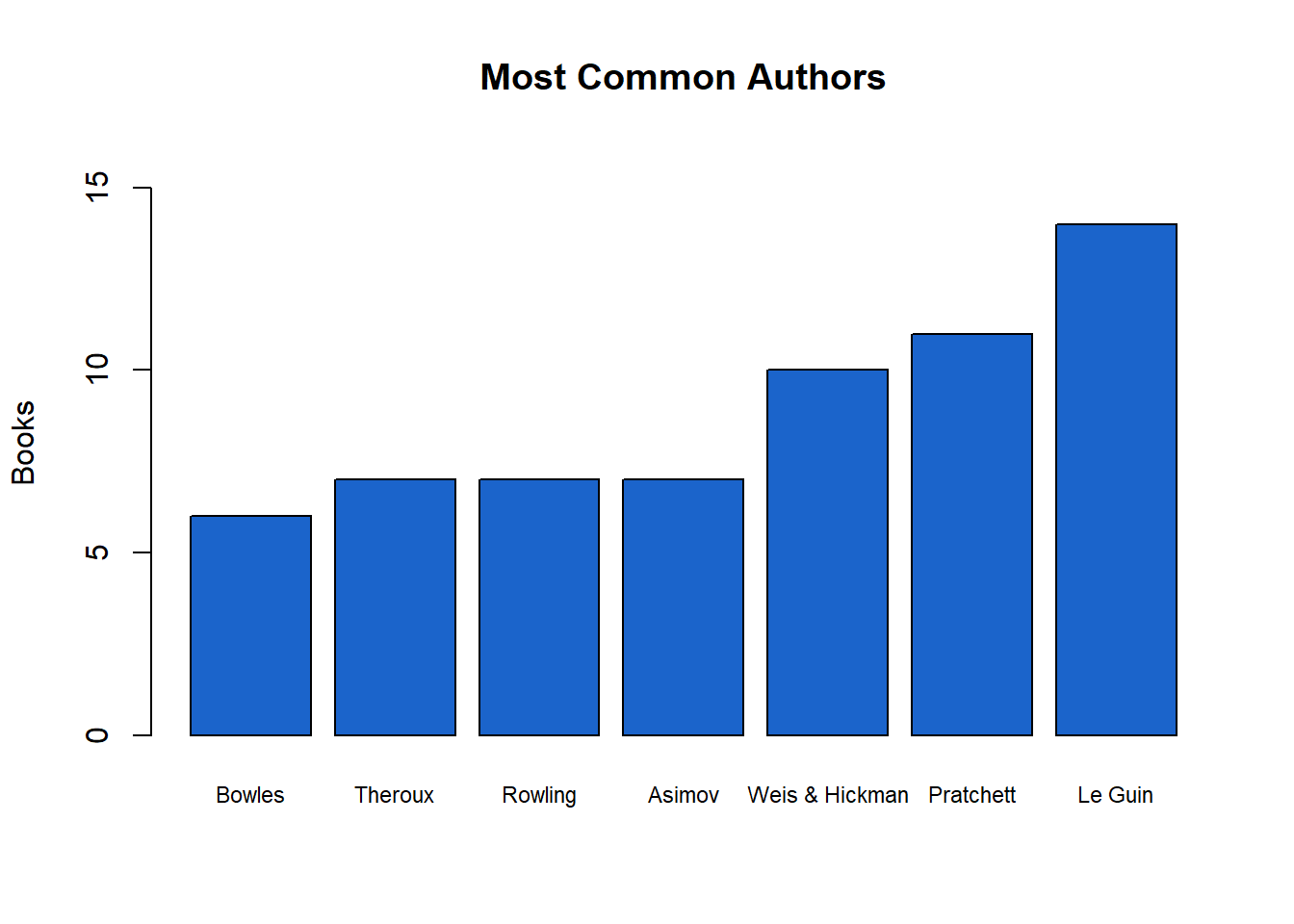 Unsurprisingly, some of my favourite authors on here, although not necessarily all authors of great quality (cough, Weis & Hickman, cough). So definitely a mix of guilty pleasures with authors whom I like because they are great writers, or have something of value to say.

And when I read: 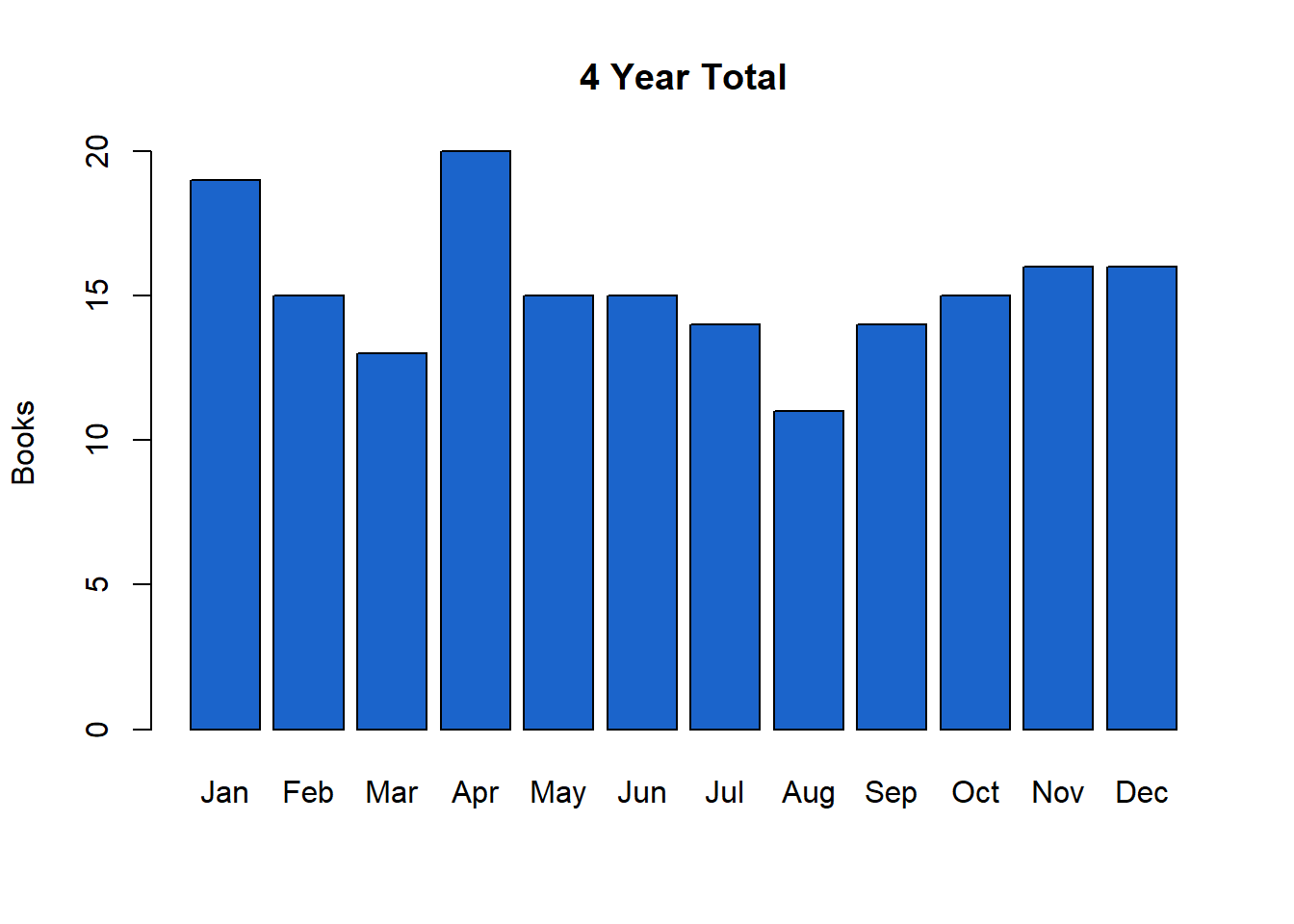 January and April are the highest, although the cold weather months in general are good for my reading. August is the worst month. I only average about 3 books per month in August. I can account for at least two Augusts: a big paper project and the Comprehensive Exam. Those two events depressed my total. On the whole though, it’s pretty consistent throughout the year.

And to end, a list of every book I read this year in order of completion.