Gryffindors are brave, Ravenclaws smart, Slytherins evil, and Hufflepuffs miscellaneous. This much we know from the Harry Potter books. What we don’t know is the makeup of each House in terms of its demographics. Which House is for the rich? Which house has the greatest diversity? Is there a gender imbalance per house? Are Slytherins really as ethnocentric as they appear in the books? Are Ravenclaws as intelligent? So many unanswered questions.

Fortunately, I conducted a survey1 that can start us on the road to answering these truly important questions.

Let’s start by looking at the overall distribution of House placement. 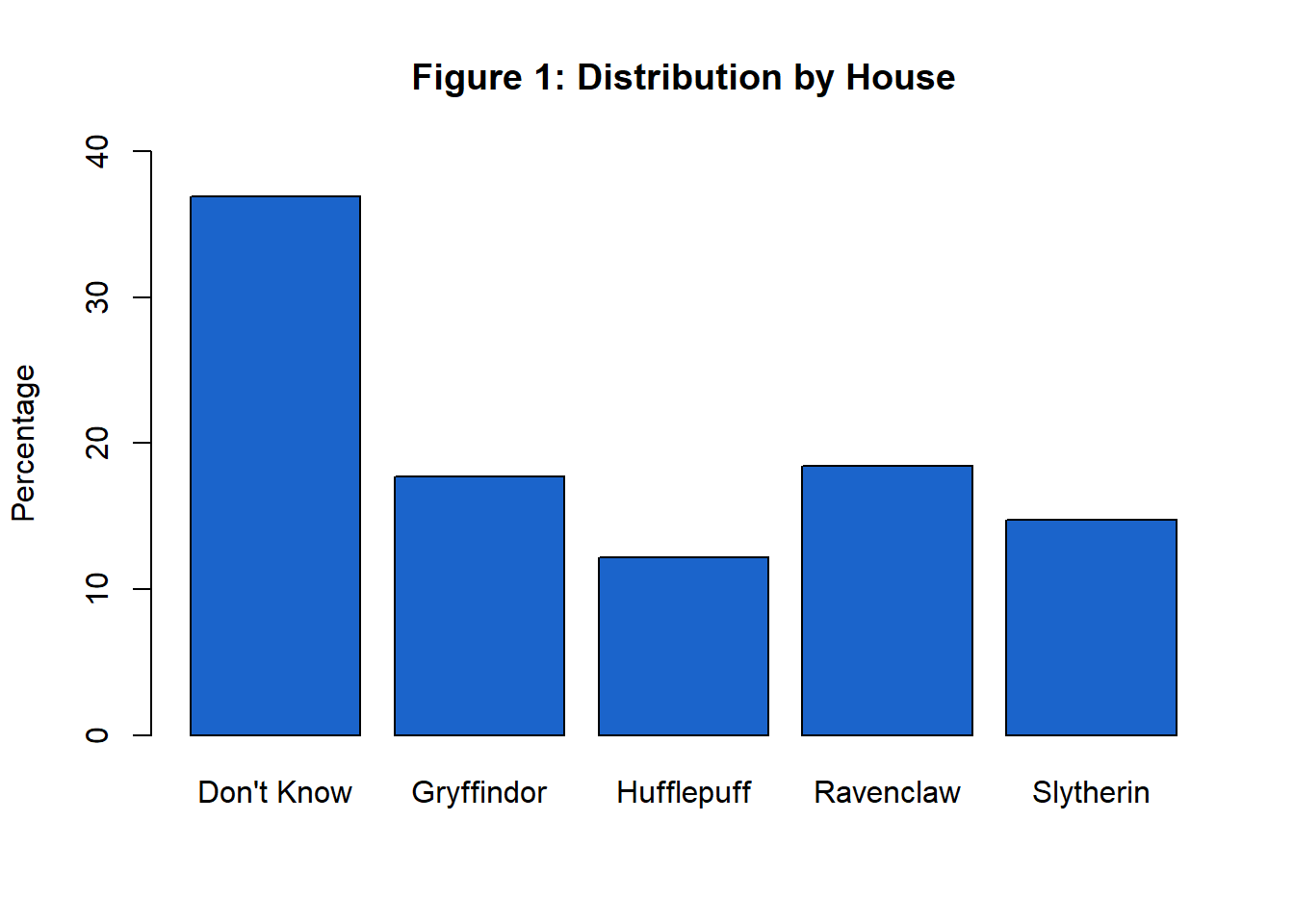 Remember that these are self-reported ratings of which Hogwarts House respondents belong to, so in a way, it is answering the question of which House they want to belong to. The modal response is that they don’t know. Among the rest, unsurprisingly, Ravenclaw is the most popular response. Everyone wants to believe they are intelligent. Gryffindor is next. Again, no surprise given the laudatory way in which Gryffindor is described in the book.2 Hilariously, more people would rather be in the House that is considered to be pretty much evil than be in Hufflepuff. Overall though, I was surprised how we ended up with a fairly evenly distributed sample across each of the four Houses. I would have thought there would be way more Gryffindors and Ravenclaws than Slytherins, for example, and not just a slightly superior number.

Now let’s take a look at gender and ethnicity. 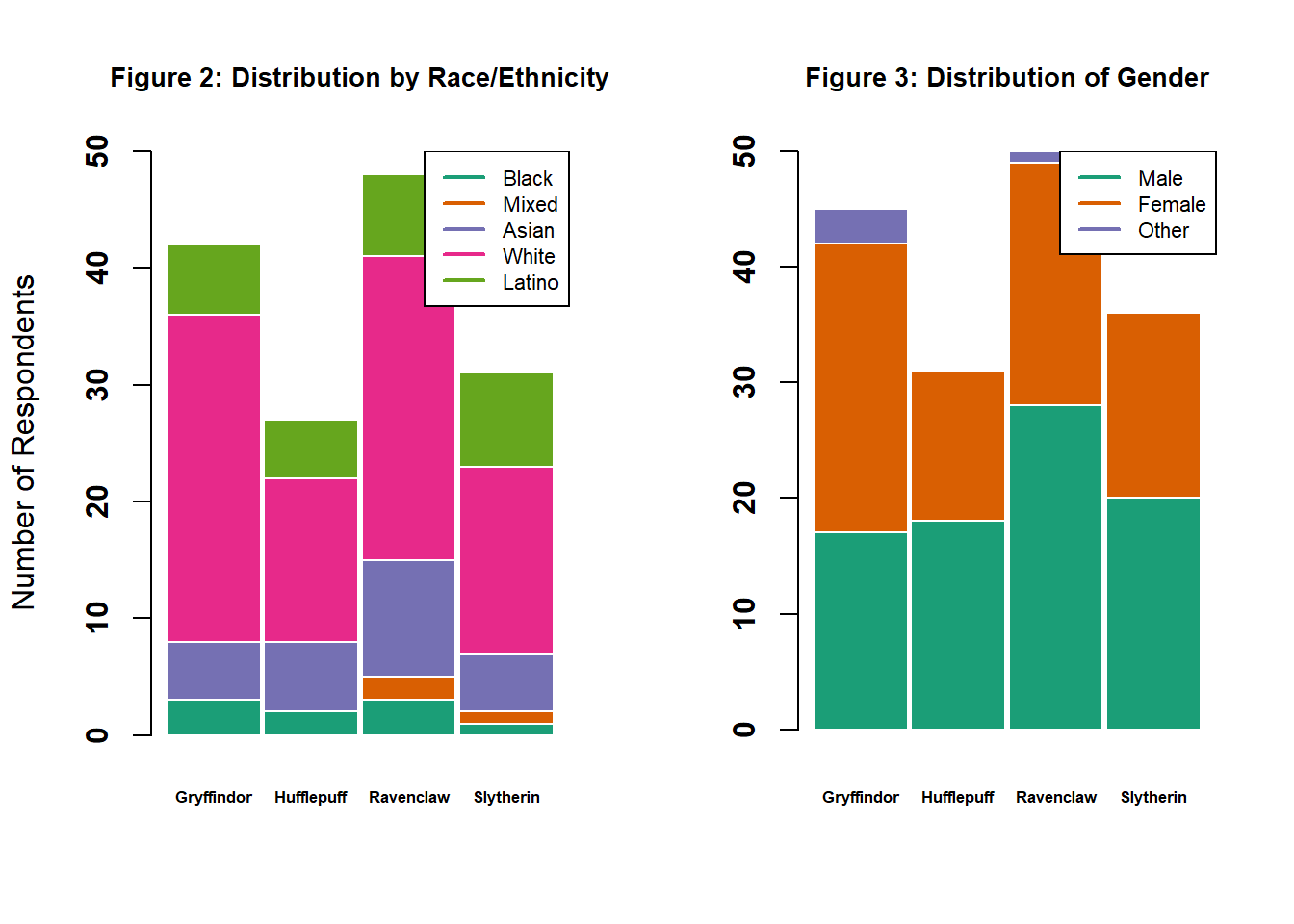 Fairly even in terms of gender distribution per house, although women seem disproportionately drawn towards Gryffindor. There is some precedence for this: they somehow sucked Hermione Granger into their House even though she is clearly a Ravenclaw.

Also fairly evenly distributed in terms of racial and ethnic demographics.3 Gryffindors are the Whitest of the Houses (about 74%), while Slytherins are the most diverse. Asians in the sample are more than twice as likely to belong to Ravenclaw as any other House. 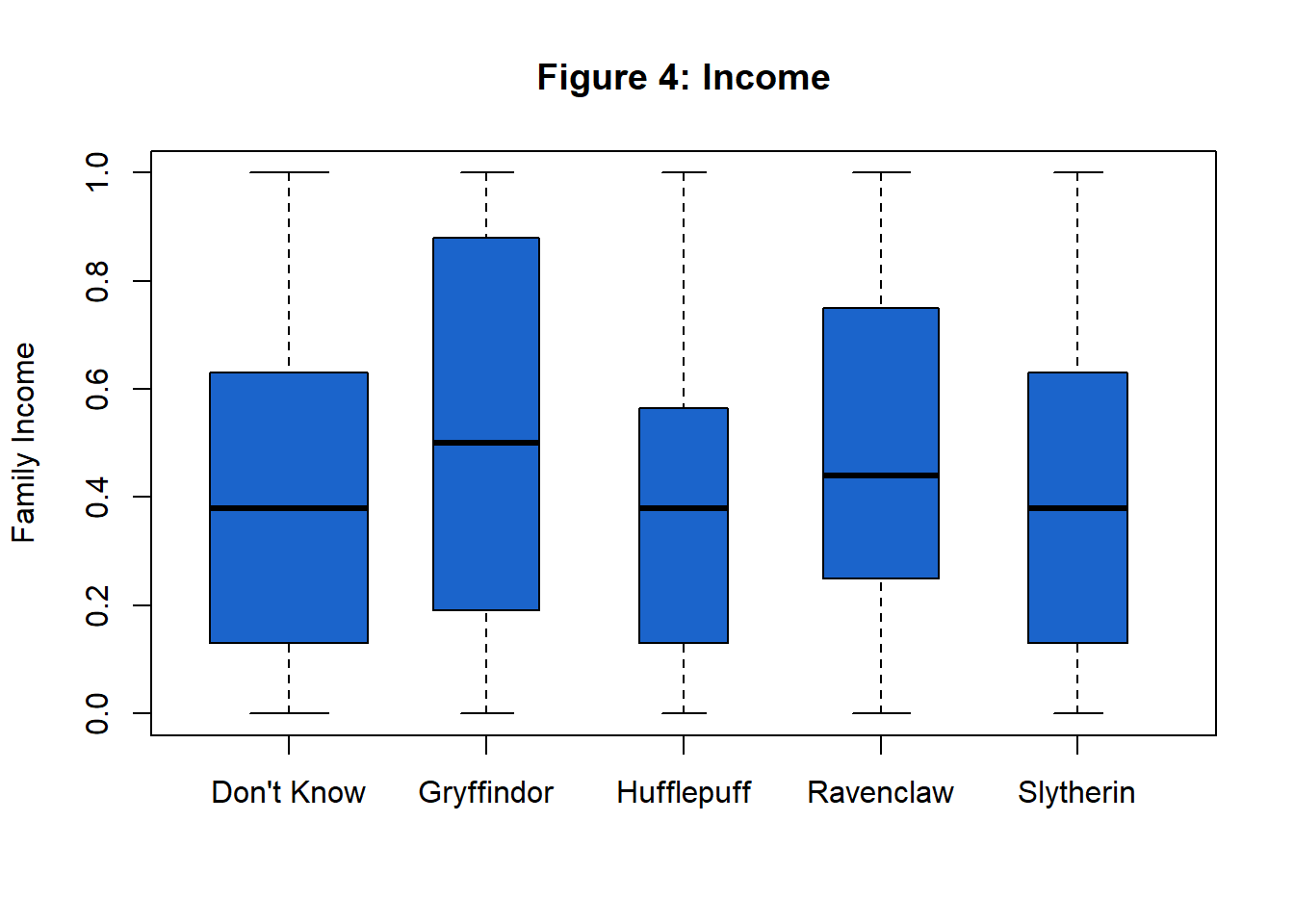 The Y-axis on this boxplot4 chart may need some explanation. Family income was measured on an 8 point ordinal scale, which was subsequently re-ordered along a 0-1 scale. 0 represents a family income of below $25,000 while 1 represents $200,000 and up. Gryffindors (the richest of the Houses) had an average family income of 0.53, which would be somewhere around $125,000. Hufflepuffs, in contrast, only make somewhere between $75,000 and $100,000.5

Now let’s think about ideology. In the books, Slytherins are portrayed as conservatives. They resist change, favour the “old ways” of organizing society, and are generally supportive of aristocracy and unsupportive of opening opportunities to non-pure blood wizards. Let’s see if that holds up in the data. 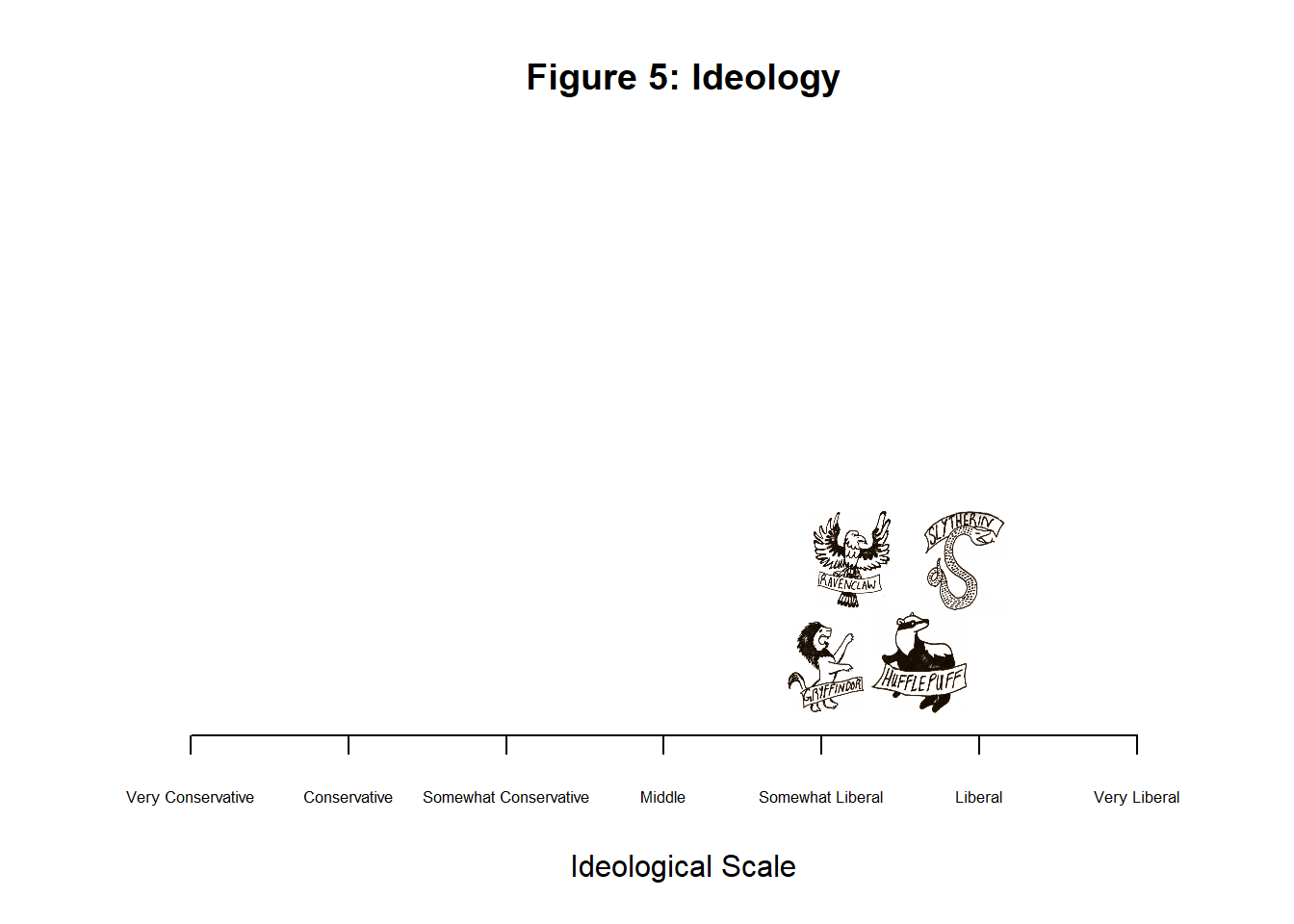 As you can see from respondents’ self-reported placement on a left-right ideological scale, Slytherins are actually the most liberal House. Gryffindors are the most conservative, although they are all bunched quite tightly between “somewhat liberal” and “liberal.” Given that my sample is overwhelmingly liberal to start with, the absolute placement of the Houses is, of course, less revealing than their position relative to one another. Even compared with each other though, there is little variation among the Houses, and hence my helpful little House logos I drew had to be resized to be quite small indeed, robbing the world of seeing my true artistic talent! You can hardly see the intricate pattern on that snake :( 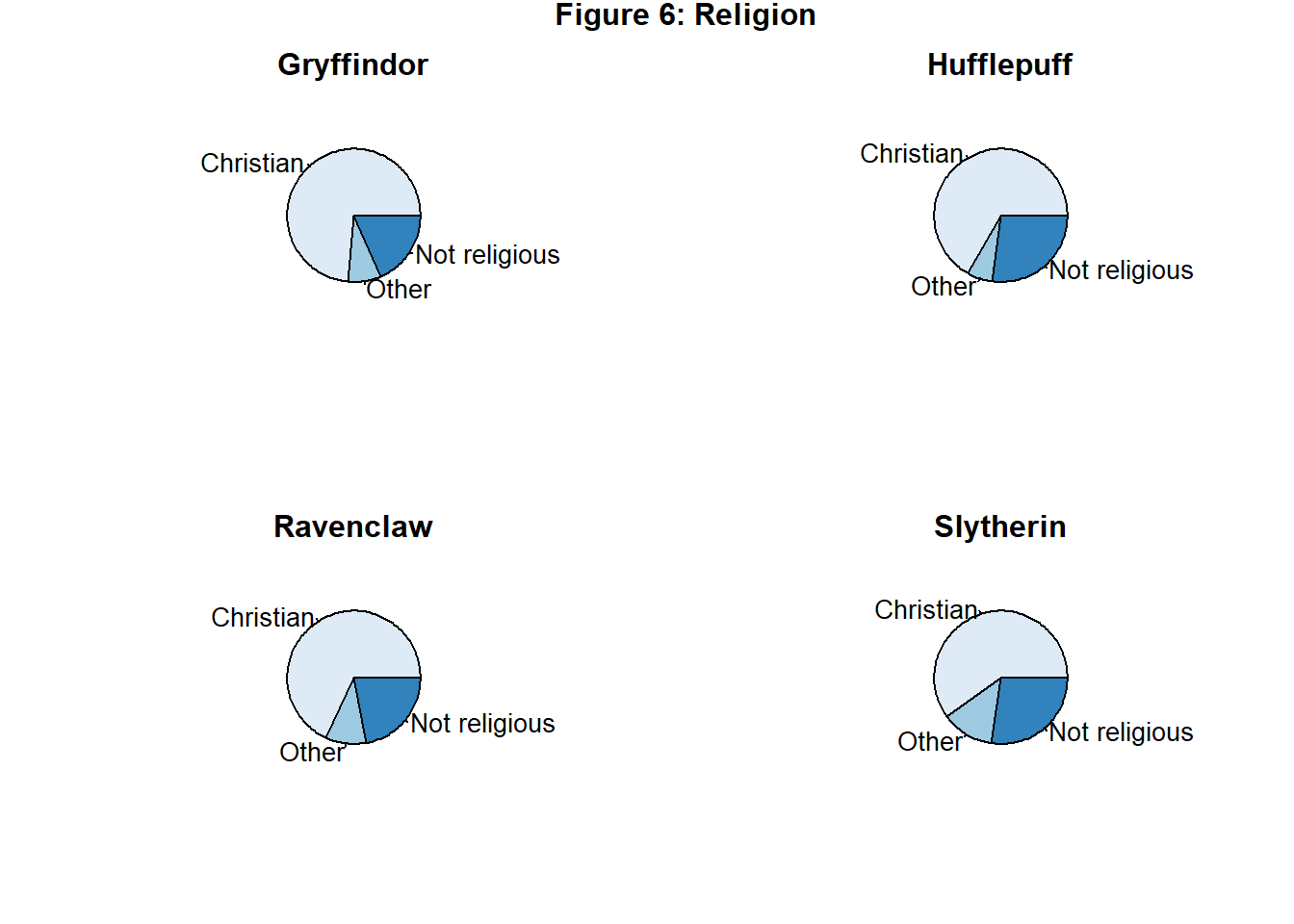 Fairly similar across the Houses, although Slytherins are the most likely to report being irreligious, agnostic, or atheist. Makes sense, right? I imagine trying to take a Slytherin to church would be like this iconic scene from The Omen.6

Next up: smarts. A common article of faith is that Ravenclaws are smarter. Does that hold up in the data? Well, I have only the roughest way to attempt to test this. The survey included a battery of questions about political and geographic knowledge.7 I have scored respondents’ answers to these questions on a 0-1 scale which I’ve given the very ostentatious name of the “Geo-Political Knowledge Scale.”8 A 1 on the scale means respondents answered every question correctly (of which there were a surprisingly many such respondents), and a 0 would mean they answered every question incorrectly. 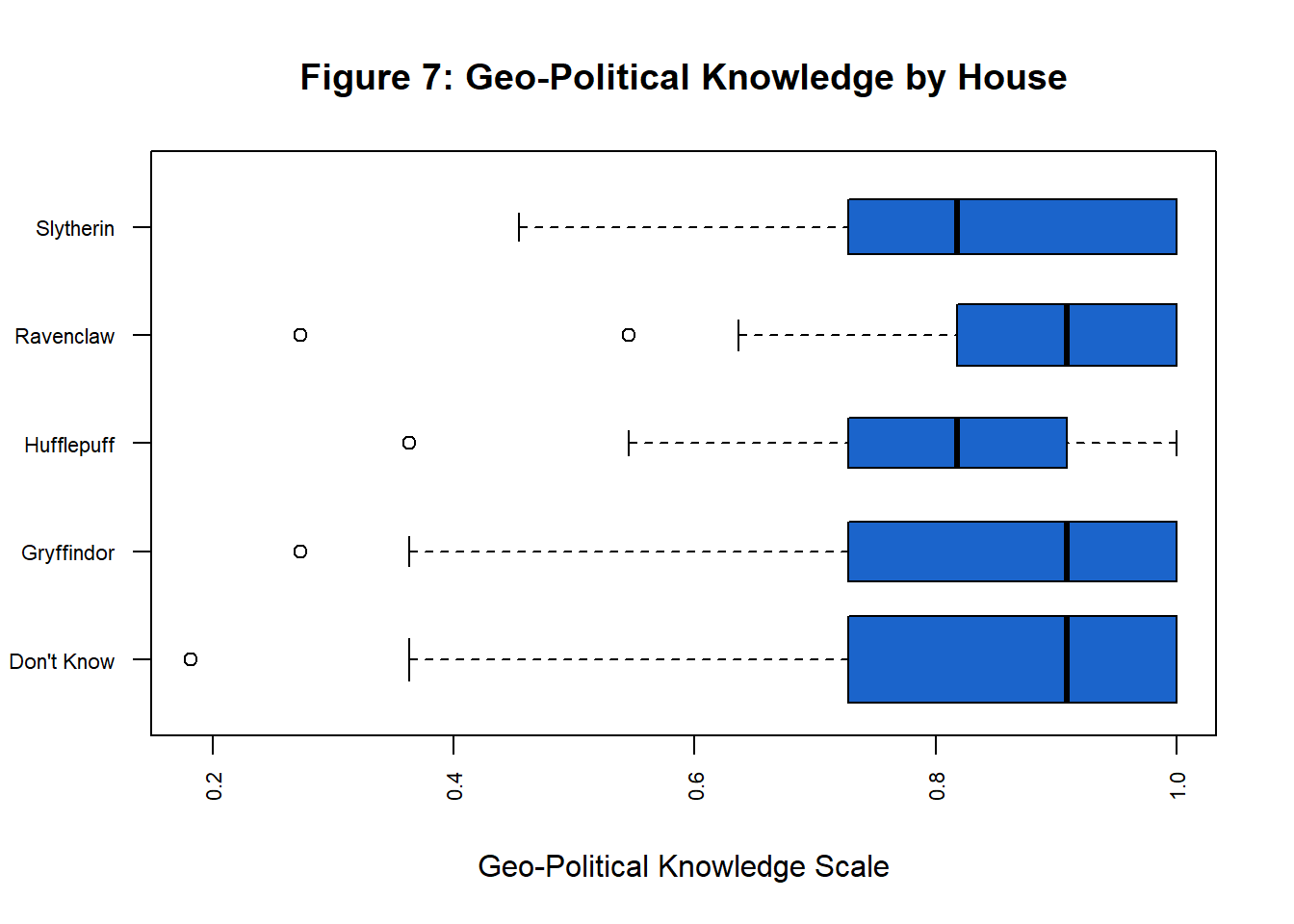 Figure 7 shows that Hufflepuffs perform the poorest when answering these questions, and Ravenclaws perform the best. That’s good news for Ravenclaw’s claim to be the smartest House…at least they can correctly identify countries on the map and know a little more about basic politics. Of course, the gap is teensy–Ravenclaws perform only about 4 percentage points better than non-Ravenclaws,9 but at least the relationship is in the expected direction.

Now let’s take a look at ethnocentrism. This is an area of scholarship that holds a lot of interest for me personally. In fact, I wrote my master’s thesis on the role of second language acquisition in moderating ethnocentrism. Ethnocentrism is just the tendency to prefer one’s own group to all other groups. For this survey, ethnocentrism was measured using Donald Kinder and Cindy Kam’s abbreviated feeling thermometer method as outlined in their excellent book on ethnocentrism Us Against Them. Respondents were asked to rate different groups (in this case, racial and ethnic groups) on an imagined “feeling thermometer” where 100 degrees means they feel very favourably towards the group(s) and 0 degrees means they feel very coldly towards the group(s). To obtain an ethnocentric score, the average of the scores respondents give to ougroups are compared to the scores they give to their ingroup. The House I’m especially interested in looking at is Slytherin. In the books, Slytherins are almost ethnocentric by definition, in that they prefer “pure-blooded” wizards, and would restrict membership in Hogwarts to exclude all those who do not fall within that category (i.e. those they call “mudbloods”). Does that hold up in our data? 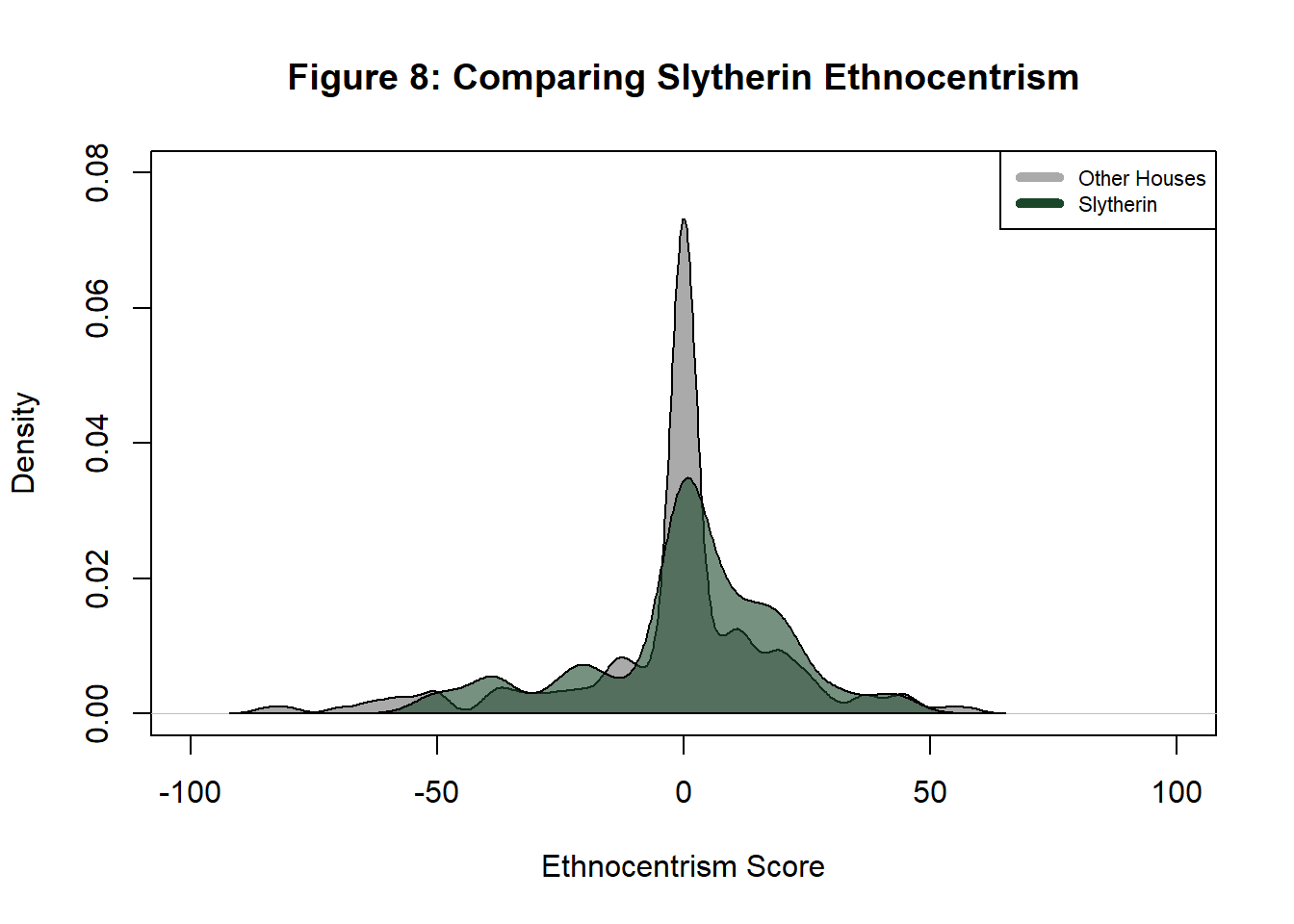 Somewhat. The density plot10 for Slytherin certainly encompasses more values to the right. Remember that scores to the right (i.e. bigger numbers) mean that a person is more ethnocentric–they give higher scores to their ingroup than to outgroups. On average though, a Slytherin is only between 2 and 3 percentage points more ethnocentric, and statistically indistinguishable from 0. Direction is right but magnitude is negligible. I’ll bet mudblood isn’t even in their vocabulary. In fact, Gryffindor is technically the most ethnocentric House according to this data.

So, what exercise taught us about the Hogwarts Houses? Here are the broad takeaways as I see them:

Of course, it should go without saying that this is a totally silly exercise that I did purely for a few kicks and giggles. The Hogwarts House question was just a fun attention check question in a survey designed for a totally different purpose–to assess the strength of regional identities. And all the relationships between Hogwarts Houses and the other variables are undoubtedly spurious. I see it as part of the same strain of “research” as the delightful study on how Nick Cage movies are correlated with the rate of people drowning. That being said, in my heart of hearts I will still always have some mistrust of anyone who tells me that they are a Slytherin.